Pick Up a Bulgogi Box at K Manna Rice Factory 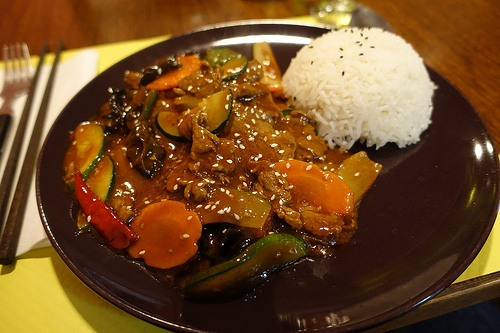 The bulgogi box is a Korean twist on the bento box that you’ll only find at K Manna Rice Factory. It’s made of a foundation of rice topped with veggies and veggie tempura, spicy cucumber, an egg, and your choice of beef, chicken, or pork bulgogi. If you’re feeling extra adventurous, you can order yours with the spicy pork (jeyuk) bulgogi or slices of Spam.

The bulgogi boxes epitomize the creativity that pervades the entire menu at K Manna Factory. The “cup bap” consists of fried kimchi, pan-fried noodles, romaine lettuce, and corn over rice, plus your choice of a meat such as short ribs, beef, or pork. It’s a modified version of the traditional bibimbap bowls, which are also on the menu. Kimchi stew, ramen noodles, and fried dumplings round out the menu at K Manna Rice Factory.